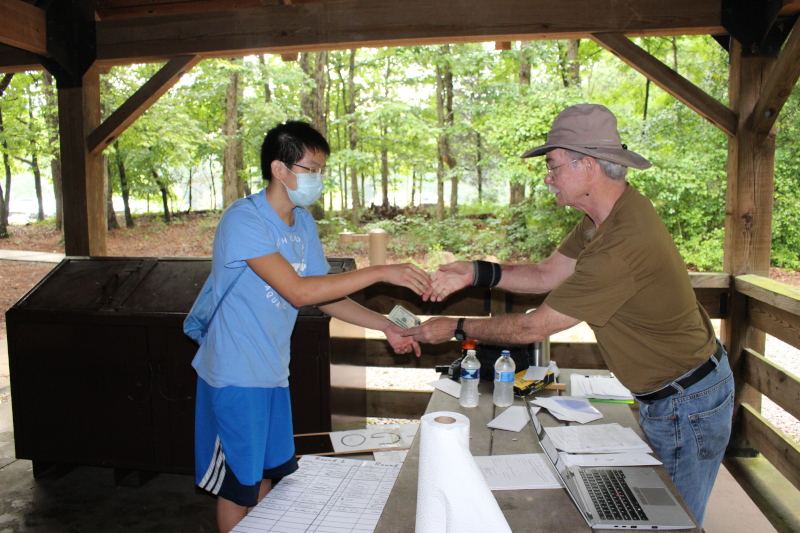 A summer tournament was held at Umstead State Park in Raleigh, NC on July 11, 2021. Twenty four Go players participated. This was the Triangle Go Group’s first paired tournament in nearly 2 years. In keeping with tradition, all entry fees were returned to the players as prize money.

In the very competitive Open Section, there was a 3 way tie for first place honors: Jeff Kuang, Nianci Gan and Sheng (Thomas) Huo each racked up 3 wins and 1 loss. Second place was earned by Xiaoping Wu. Strengths in the top band ranged from 1 Dan to 4 Dan.

First place in Section B was captured by Leroy Anderson III with an impressive 3-1 record, losing only to a strong player from the Open Section. Justin Blank placed second with 2 wins and 2 losses. Section C was won by Tom Roncoli, finishing the day with a 3 and 1 tally, and second place was shared by 4 players each winning 2 games: Stephen Gilbert, Andrew Thieman, Harrison Pedigo and Bob Bacon.

The only perfect record of the day was attained by Justin Su in Section D, handily winning all 4 of his games. Second place in Section D was awarded to Russel Herman with a 3-1 performance.

Additional photos will be posted soon.

The following tables reflect the 4 rounds of play. The first table is a record of entries with Win/Loss records. The next 4 tables display the results from each round. This data is based on the TD file submitted to the AGA, cross checked with the wall boards from the tournament. Komi is shown as a whole number. A Komi of 7 represents a komi of 7.5, and a komi of 0 means an actual komi of 0.5. In the Rounds tables, the winner of each pairing is in bold type, in addition to either B (black) or W (white) appearing in the Winner column. In pairings with a handicap of 1 stone, the komi and handicap columns each contain a zero, in keeping with the AGA guidelines for the TD file.