Tournaments, Now and Then

The events listed below are specific to the SouthEastern US. Please see the AGA website for a more complete listing.

In Arlington, Virginia, the NOVA Go Club sponsors 6 great tournaments a year, including the Pumpkin Classic, the Holiday Helper, the Chinese New Year Tournament, the Cherry Blossom, May Madness, and the Congress Tune-Up.

The following are previously held area tournaments. Oftentimes, these tournaments recur yearly, and are included here to help you plan your time and your events.

The Thirteenth Annual Triangle Memorial Tournament was held on September 21, 2013. Complete results are online here. Photos are available for viewing at the photo webpage.

The Twelfth Annual Triangle Memorial Tournament was held on September 23, 2012. Results may be viewed here. Photos are online now, at the photo webpage.

The Eleventh Annual Triangle Memorial Tournament was held on September 17, 2011

The Tenth Annual Triangle Memorial Tournament was held on September 25, 2010

The Ninth Annual Triangle Memorial Tournament was held on September 19, 2009

The Cary Go Club organized the Sixth Annual Carolina Spring Go Tournament on March 21st, 2009, in the Talley Center at NCSU. A few photos taken at this event are available here.

The 22nd U.S. Go Congress was held at Black Mountain, North Carolina, on August 12 through 20, 2006. The Triangle Go Group was pleased to be the local sponsor for this exciting event. The Congress included the US Open, a play anytime Self-Paired Handicap Tournament, opportunities for Professional Instruction, a Midnight Go Tournament, Lightning Go, Pair Go, the North American Ing Cup, the Redmond Cup, the Chuck Robbins Challenge, and more.

The 23rd US Go Congress was at Millersville University, on July 28th through August 4th, 2007, hosted by the Lancaster Go Club and the Penn Go Society.

The 20th US Go Congress was held July 31 through August 8, 2004, in Rochester, New York, and was hosted by the Empty Sky Go Club, the AGA and the Rochester Institute of Technology.

The 19th Mid-Atlantic Championship was held in College Park, MD, on September 15-16, 2007. There were 3 rounds on Saturday, and 2 on Sunday. See http://chapters.usgo.org/umd/MidAtlantic.html for information.

The Seventh Annual Triangle Memorial Tournament was held on Saturday and Sunday, September 29th and 30th, 2007.

The UMBC Fall Tournament was held October 7, 2007, in Catonsville, MD.

The Guo Juan Columbus Day Workshop at Round Top, New York, was held on October 5th to 8th, 2007.

The AGA maintains a current list of publicized tournaments around the US and the World. Please check their site for upcoming events.

First prize in the top section was $400.00, with generous cash prizes in all sections.

Photos from this tournament will be posted before too long... surely before next year...

The Eighth Annual Triangle Memorial Tournament was held September 20, 2008, at the Reedy Creek section of Umstead Park, just off Harrison Avenue in Cary.

Top prize in the top section was $400.00, with generous cash prizes in all sections. Additionally, Bill Cobb of Slate & Shell generously donated tsumego books for every player, plus a selection of titles to be awarded as prizes for the top placing players. A delicious lunch was provided by Arlene and Adam Bridges. Pairings were promptly posted and the tournment was smoothly conducted by Tournament Director Charles Alden, assisted by Paul Celmer.

More details will be provided in the near future. For now, here are some photos from the event.

The Seventh Annual Triangle Memorial Tournament was held on September 29th and 30th, 2007, and was directed by Owen Chen. The weather was spectacular in the wooded parkland setting. As has become customary, lunch was provided by Arlene Bridges.

32 players participated in the 6 round event. Changlong Wu took home the 400 dollar first place prize as he won the top section again this year, a feat he has accomplished three years previously. Winners: 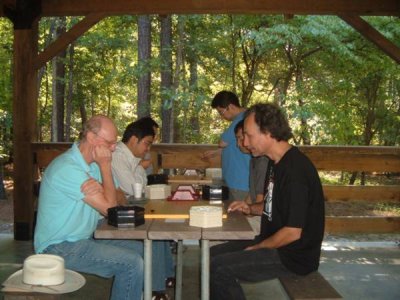 Equipment was provided by the Ing Foundation.

The Fourth Annual Joe Shoenfield Memorial Marathon Go Tournament was held September 25th, 2004, in the Triangle, NC area, and is summarized here.  Game results and photos are online for you to view.

The tournament of September 20, 2003 was held in the wake of Hurricane Isabel. Click here to view results from the 2003 tournament.

The popular and well-attended tournament of 2002 was made possible by a generous grant from the Ing Foundation. Results and photos from the 2002 tournament are available here.

Pictures from the 2001 and 2002 Joe Shoenfield Tournaments are available for viewing, here.

A record-breaking total of 51 players, including 16 dans, assembled on a sunny fall afternoon at Umstead Park in Cary, North Carolina for the Fifth Memorial Go Marathon, hosted by the Triangle Go Group. 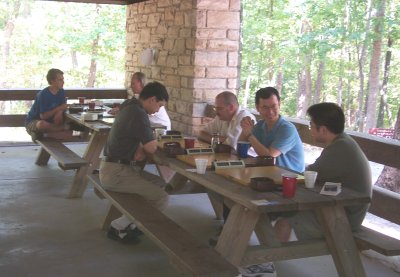 The last game to end featured a thrilling finish in the championship game of the Open Section (4D and above), where Peigang Zhang (5-0) managed a successful invasion against Changlong Wu (4-1) with both players having less than a minute for their final dozen moves in byo-yomi. In Section A (2D-3D) Jeff Kuang (5-0) edged Woojin Han (4-1) by a half point in the first round. Tom Bitonti swept Section B (1D-2k) with a perfect 5-0 score, and Glenn Williamson was clear first with 4-1 in Group C (3k-5k). Sergio Parreiras and John Moore tied for first in Section D (6k-8k) with scores of 4-1. Walter Nurmi (5-0) topped Joey O'Donnell (4-1) in the final round to win Section E (9k-12k), and Tom Carlson and Jonathan Hilt scored 4-1 to tie for first in Section F (16k and up).

Following tradition, the tournament earned its name by packing five rounds of play and two rounds of feasting into one day. All entry fees were returned to the players as prize money and meals prepared on site. The tournament commemorates Joe Shoenfield and Dick Scoville, two long-time Duke math professors who helped create a go tradition in central North Carolina.

What is the Joe Shoenfield Tournament?

The Triangle Go Group has been sponsoring the annual Joe Shoenfield Tournament in the Durham/Chapel Hill/Raleigh area since 2001.

The third annual Joe Shoenfeild Memorial Go tournament was held September 20, 2003 in Durham, North Carolina. The tournament set another record, with 45 players from throughout North Carolina as well as from Virginia and even one from Lancaster Pennsylvania. Charles Alden was the tournament director.

Cash prizes were awarded in each section. Despite the tight time control, only a handful of the more than 200 games played were decided by time. Defending champion Suk Jun Kim took first prize in the open section with a perfect 5-0, with, Sheng Feng and Yuanjing Zhou tied for second place at 4-1. The A section was won by Woojin Han, 1k, at 4-1, and Brent Marinello won the B section, also at 4-1. Erik Lindquist and Wayne Hansen, both 7k, tied for first in section C at 4-1 and Frank Thorne 11K swept section D at 5-0. A three-way tie for first in section E was shared by Dave Laverdure 16k, Scott Ellis 17k, and Joseph O'Donnell 20k, all at 4-1.

The tournament had many unique features that contributed to the unusually strong turnout. Because of the full schedule of five rounds of rapid-pace play, players do not have time to leave the premises for meals, and the organizers provide both a full lunch and supper at a hospitable residential site. Local members Peter Armenia, Dave Fruchtenicht and Adam Bridges, and Adam's wife Arlene, as well as others provided everything from a cooked turkey and hot dogs to kim chee. The tournament was held at the home of Charles and Tessie Alden. All entry fees were returned in prizes and meal expenses.

There was also a great deal of behind the scenes cooperation amongst the members of the regional go community that was essential for success. For example, sets and clocks donated by the Ing foundation were brought in by the Richmond, Raleigh, and Charlotte Go Clubs to equip the large field.

Our club was gratified that nearly everyone who said they would come did, despite the fact that hurricane Isabel had bulldozed her way through the northeastern part of North Carolina and Virgina only two days before, leaving much of the region without power. The hurricane did, however, engender many fascinating anecdotes about harrowing adventures dodging downed trees and power lines those from out of the state encountered on their trip south.

Most inspiring of these tales, perhaps, was the inimitable Chuck Robbins' account of coming all the way from Pennsylvania only to have to crawl along the interstate as cars squeezed past an overturned RV on I-85 in Virginia, and then having to take a few hours on back roads to finally get to Durham Friday evening (in time for a little informal Go playing, I might add). After his mad trek south, he played all day the next Saturday, and then left Saturday night for a ten hour drive to Hoboken New Jersey to direct a tournament there on Sunday! We suppose the force of a hurricane is nothing compared to the passion a Go player has for the game. And as Charles Alden said in a pre-storm email to let everyone know the tournament would go on no matter what, " not to worry - a hurricane has only one eye."

Since the tournament was covered in the press by both the Durham Morning Herald and the Asian Herald of Charlotte, we hope this tournament will not only serve to strengthen the bonds amongst go players in our region, but to also attract beginners and players that are not aware that we have a strong, welcoming club with over twenty active members that meet over the board each week. We in the Triangle Go Group continue to pursue our goal of demonstrating the sometimes difficult to describe merits of "real" games as opposed to playing solely on the internet. And we are sure that internationally renowned logician Joe Shoenfield, for decades one of the few players in Durham and the best example of dedication to over the board play we have ever met, would be pleasantly amazed at how the tournament has grown.

A total of 38 players participated in the Fourth Shoenfield Memorial Go Marathon, the Triangle Go Group's unique 5-round tournament distinguished by non-stop play and on-site cuisine. The tournament was hosted by the Thai Tana Restaurant in Research Triangle Park, who also provided a delicious buffet luncheon at midday. Generous prizes were awarded in all six sections, thanks to a grant from the Ing Foundation.

The Open section, with eight players rated 6 dan to 3 dan, featured a final round showdown between the top two players, who entered the round undefeated. In the decisive game Changlong Wu 6D edged Sheng Feng 5D by 3 points to capture first prize of $250. Feng won $150 for clear second place, and the third place prize of $100 went to veteran player Yoshiteru Suzuki. Mr. Suzuki, the tournament's oldest player, returned from Delaware for the tournament and showed astonshing stamina in turning around his final round game with skillful yose play.

In the C section (8k-11k) veteran John Greiner rolled through with a perfect 5-0 record and pocketed $100. Similarly in the D section (12k-14k) newcomer Sergio Parreiras was impressive in posting the third perfect score of the day and won $90.

And in the E section one of the stories of the day was the victory by 13-year-old Rob Lampe, the youngest player in the history of the tournament, who posted a score of 3-2 and won clear first and $80. Rob clearly understood the Ing scoring system, winning the decisive game in the section by one point by filling the final dame point in the position after his opponent had passed!